Edward Oakley has passed away at aged 78. As head of Obeetee, India’s leading carpet and rug company and ORIA member, he modernized the family owned business which had been established in the 19thcentury in Mirzapur. By 1969, his company was the country’s largest exporter of rugs and carpets to the US and Europe. 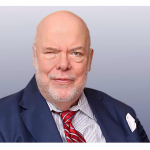 In 2012 he sold his company while remaining as chairman emeritus. He moved to Noida, a satellite city of Delhi, where he indulged his passion for modern Indian art.

He is survived by his adopted daughters, Meenu and Ekta, and his sister Sally.