On January 12, 2017, The Oriental Rug Importers Association held its annual meeting at Americasmart-Atlanta. The General Membership elected the following officers: 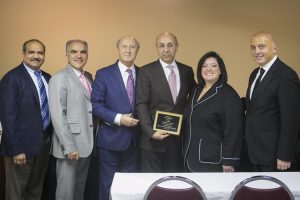 The meeting was topped off by a presentation made to out-going President Mr. Reza Momeni. ORIA Executive Director Lucille Laufer and In-Coming President Mr. Ramin Kalaty presented Mr. Momeni “The ORIA Presidents’ Plaque” to recognize and thank him for his service to this Association for the past three years.